Many of the historic sights - along with a description - can be seen on our Augsburg Images page - however a short history of the town and of one of the famous families are given below.

Augsburg revels in its title of the oldest city in Bavaria - one up on its larger, noisier and more fashionable neighbour to the east Munich.

(In fact the founding of Munich can be traced back to negotiations in the Diet of Augsburg in what is known as "the Augsburg decision".)

Be that as it may, Augusta Vindelicorum was originally a Roman town, built in a strategic position which allowed control of the access to river crossings (the Lech and the Danube). Although it was named after the Emperor at the time, Augustus, it was actually built by his stepson, the Roman general Drusus. 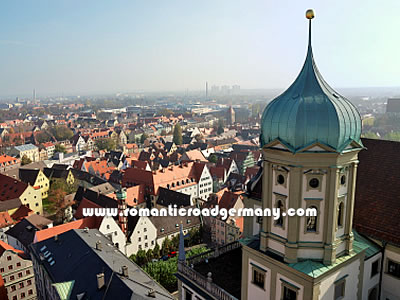 The original Roman settlement was destroyed during the fall of the Roman empire, but people continued to live there and it became the seat of the powerful Augsburg Prince-Bishops.

Like other towns along the Romantic Road it was one of the free Imperial cities and in its heyday in the 16th century was one of the most important trading and cultural centres in the world. The importance of the city at that time is shown in the fact that it was the seat of the Imperial Diet (council) and for one of the important peace conferences during the turbulence of the Reformation.

As Augsburg moved into the more modern period it moved away from being a city of trade and culture to being an important industrial centre - with much of the industry being based around the old trade of weaving but using tools to mechanise production.

The Fugger Family and Augsburg

In Augsburg the Fugger family is represented by their famous medieval social housing project - the Fuggerei - and the Town Palace that they left behind.

But what are possibly Augsburg's most famous and influential family had an incredible effect on European history and the rise and fall of nations through their financial wheelings and dealings. 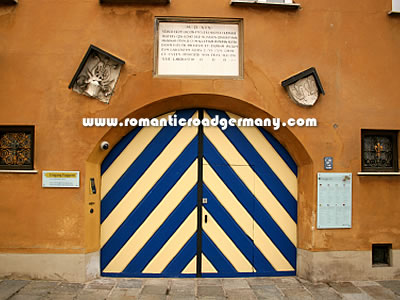 Originally a family involved in weaving, the forefathers of the most influential generation moved to Augsburg in the 14th century. Within a century they were listed in city revenue lists as the seventh richest family and changed their guild from weaving to trade.

Essentially an import-export business, the Fuggers became more and more powerful as they started to put their profits to work in buying concessions to mine valuable ores (for example, the largest silver works in the world in Schwaz in the Austrian Tyrol) and most importantly to advance credit to rulers of states who were in debt due to ruinous wars or extravagance.

Within 20 years, the first mention was made of the Fugger "bank" and they became the financial advisors (and creditors) of the Pope, the Hapsburg Emperors and Henry VIII of England.

In the 16th century the family was raised to the nobility and started work on their most famous Augsburg legacy. The Fuggerei consisted of 110 units of housing for poor families who did not want to rely on charity. The rent was 1 guilder a year, a nominal sum, and residents were expected to pray daily for the Fuggers. Spouses of inhabitants who died were allowed to remain in the tenancied apartments.

At the peak of their prosperity and influence, the Fuggers left a rich architectural and artistic legacy all over Europe but the Thirty Years War and its effect on Germany changed the role of the family business. They withdrew from trade and became a more private but still very wealthy family "organisation".

The Fuggerei social housing was very badly damaged by aerial bombing in the Second World War but the influential Fugger family council took the decision to rebuild the quarter in 1944 and the work was finished by 1948. It was renovated in the 60s and 70s, the last major work on the project.
Website: www.fugger.de

Looking for some of the best-rated accommodation in Augsburg?
Check accommodation rated 'superb' or 'exceptional' by visitors who used booking reservation website Booking.com. No reservation fees.
Check availability

The Augsburg Tourist Office is located in the centre of the town in the square in front of the Town Hall. It is open all week in the summer and from Monday-Saturday in the winter. In the summer months guided city tours are available every day.
Website: www.augsburg.de