A good selection of images of Dinkelbühl's historic sights - along with a description - can be seen on our Dinkelsbühl Images page - however a short history of the town and the Minster are detailed below.

Dinkelsbühl stood at the junction of two very important trade routes - the north-south Germany-Italy route and the route from the Rhine towns through to Eastern Europe.

The town is thought to have been founded in the 8th century and the first official mention in documents (as "Tinkelspuhel") is in the 12th century when it already apparently had the right to hold a market.

The town became an Imperial free city and started work on the fortifications which still surround the historic centre in the 13th century. 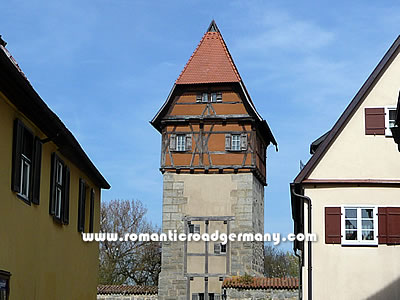 The wealth of the town was built on weaving and cloth manufacturing and the trading guilds were at the forefront of efforts to extend the privileges of power (such as council membership) to the guilds and merchants.

In the Middle Ages, the town was rocked by the religious wars of the Reformation and Counter Reformation, with control over the town passing from Protestant to Catholic and back again a number of times. The majority of the population were Protestant but with the settlement in the 17th century of the Concordance of Equality Dinkelsbühl became a town where there are strict rules on the fair treatment of believers from both religions.

However, these wars, and industrial and economic changes in the production of clothing led to a period of decline for the town, which is one reason why so many of the old town walls and houses still stand. (People didn't have the money to build new properties which would have resulted in the demolition of older ones.)

Another reason for the current "look" was the decision of Ludwig I of Bavaria to safeguard the historic buildings and protect them from destruction in the early 19th century.

The festival of the "Kinderzeche" draws part of its content from the Thirty Years' War. The children's festival is held every year in July and purports to represent the rescue of the town from destruction by Swedish mercenaries by the intervention of the children of the town, led by the gatekeeper's daughter. It is also historically related to the feasts and excursions enjoyed by Catholic and Protestant schoolchildren at the end of the school year in the Middle Ages.

The Minster is the impressive and quite massive church at the historic heart of Dinkelsbühl.

The core of the current structure was built in the 15th century - adding on to older buildings that had existed in this area.

The tower of the church was originally not planned to be the church tower at all - it was a free-standing structure to the west of the main building which had been built in the 12th century. 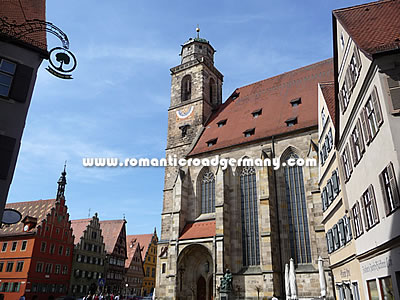 However the ambitious plans for a tower at the northern end had to be put aside because of lack of money and the architects extended the church building to the old tower. The style of the main building is late Gothic.

The minster became popular with pilgrims in later centuries because of the highly-decorated altars inside the church. It is possible to climb the tower during weekend afternoons with good weather in the summer months.

Looking for some of the best-rated accommodation in Dinkelsbühl?
Check hotels, guesthouses and apartments rated 'superb' or 'exceptional' by visitors like you who used booking reservation website Booking.com. No reservation fees.
Check availability

The Dinkelsbühl Tourist Office is situated in the centre of the town in Marktplatz, in the Haus der Geschichte. It is open every day all year round.
Website: www.dinkelsbuehl.de