Plenty of Nördlingen's historic sights - along with a description - can be seen on our Nördlingen Images page, but here is a short overview of the history, along with the unusual geological structure beneath the feet of visitors and some of the places to go and find out more about this Bavarian town.

Nördlingen is located near a Roman settlement built on the road north from Augsburg (an important point on the Via Claudia Augusta route from Italy).

The "official" first mention of Nördlingen comes in 898 when "Nordilinga" is used - the 1100th birthday festivities took place in 1998.

Nördlingen grew to prominence because of its importance in trade in the area. It was a Free City and the local fair was one of the most important in this region in the Middle Ages. 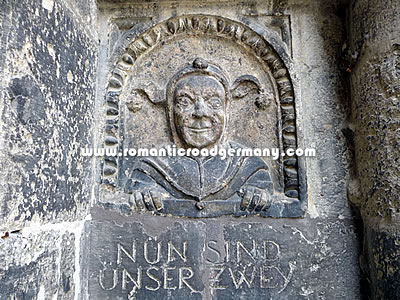 Testimony to that can be seen in the numbers of houses and buildings which still exist that used to house tradesmen's goods or a market for their wares.

The town walls and fortifications had been built in the 14th century and Nördlingen was the site of a battle between Catholic and Protestant forces in the Thirty Years' War in the 17th century. Nördlingen eventually lost its independence and became part of Bavaria at the start of the 19th century and is now the administrative centre of the Donau-Ries area.

Nördlingen sits near the impact point of a meteorite which hit the earth around 15 million years ago.

The meteor is thought to have been around a kilometre in width and the crater that it formed is one of the best-studied in the world. American astronauts underwent geological training here before their trips to the moon. 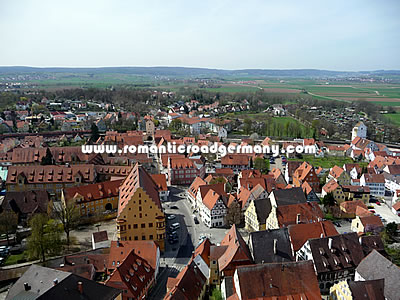 It is the site of the National Geopark Ries, which offers group tours and walking trails in the area, as well as the Ries Crater Museum in Nördlingen, with plenty of information about the impact and meteorites.
Website: www.rieskrater-museum.de

As well as the Ries Crater Museum, Nördlingen boasts some other interesting exhibitions.

The Town Wall Museum is situated in the Löpsinger Tower (pictured on the right) and covers the history of the fortifications around the town.

The Town Museum is located to the north of the town near the Ries Crater Museum and concentrates on the development and economic ups and downs of the town over the centuries. 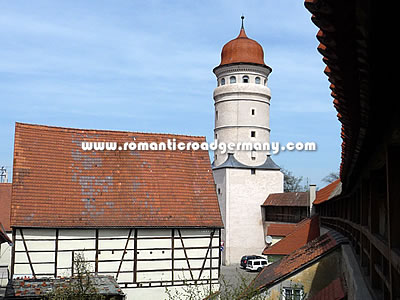 Outside the town walls and behind the railway station is the Bavarian Railway Museum, with an open-air display of historic rolling stock.
Website: www.bayerisches-eisenbahnmuseum.de

Looking for accommodation of all kinds in Nördlingen?
Check hotels, guesthouses and apartments visitors like you used at booking reservation website Booking.com. No reservation fees.
Check availability

The Nördlingen Tourist Office is located in the central square area, in the Leihhaus behind the Town Hall. It is open Mon-Fri year round, and on weekends and public holidays in the summer months. Daily guided tours of the town are offered in German in the summertime.
Website: www.noerdlingen.de