A number of photos of Rothenburg and the historic locations - along with a description - can be seen on our Places to See in Rothenburg page - however a short history of the town and of one of the best-known businesses are given below.

Rothenburg ob der Tauber is one of the oldest and most historic of the medieval towns along the Romantic Road.

Although there had been settlements in the area and in the neighbouring Tauber valley for many centuries before, the official history of Rothenburg is generally thought to date from the 10th century with the construction of a castle in an easily-defensible position above the River Tauber (thus "Rothenburg ob der Tauber" - ober meaning above). 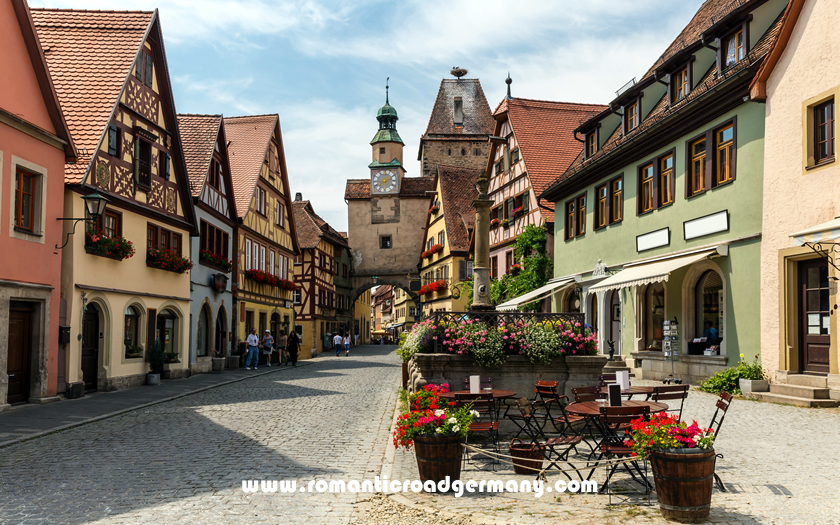 The original line of rulers died out and so the castle and neighbouring town came into the hands of the Hohenstaufen Emperors of Germany, who granted it an official town charter in the 12th century.

The town walls and many of the buildings which still exist were constructed during the next century (in fact, rapid expansion meant that a new outer wall had to be constructed within 30 years of the former city walls being finished) and the town was granted the position of a Free Imperial City.

Despite these fortifications (or perhaps they are a sign of the times) Rothenburg has a tortuous history of wars and alliances, ranging from involvement in wars between the counts and princes, followed by enthusiastic participation in the Peasants' War (which led to mass executions in the market place).

The subsequent Thirty Years' War gave the legend of the "Meistertrunk" to Rothenburg - the town mayor is supposed to have quaffed a massive tankard of local wine as part of a bet to save the Protestant town from pillaging by Catholic forces. In fact, the town was forced to pay a massive amount of money and goods as a bribe to pay off the opposing forces after pleas from the children and womenfolk of the town.

A play was developed around the legendary events towards the end of the 19th century - the town had long since become part of Bavaria - which helped to market the town's medieval charms and led to the interest in the the history and appearance of Rothenburg on an international level and to restrictive laws being introduced to control changes to the "look" of the historic centre.

This was part of the reason for the relative preservation of the town from the destruction experienced by many other places in the Second World War. Although the town was bombed from the air, ground commanders on both sides hesitated to attack or defend with full force as the war came to an end.

The damage wrought by the bombing was repaired, in part, by donations from across the world.

Performances of the Meistertrunk play traditionally took place at Whitsun, but they have now been extended to other festivals in Rothenburg in the summer months. Details can be seen on a specific Meistertrunk website: www.meistertrunk.de

The Schäfertanz - the shepherds' dance stemming from the days of the plague - has also been revived and the celebration is carried out several times in the summer. It also has its own website: www.schaefertanzrothenburg.de

The Rothenburg Wine Festival (Rothenburger Weindorf) is held in high season with stands offering local wines and food and concerts by all kinds of musicians.

The Rothenburg Advent Market, or Christmas Market, starts in November and offers a different experience than the year-round Christmas shops, with stalls offering seasonal food and gifts set up in the market square.

Looking for some of the best-rated accommodation in Rothenburg?
Check hotels, guesthouses and apartments rated 'superb' or 'exceptional' by visitors like you who used booking reservation website Booking.com. No reservation fees.
Check availability

The story of Käthe Wohlfahrt and the Christmas villages and Christmas shops is connected in most people's minds to Rothenburg ob der Tauber, the "Christmas town".

However, the original founder Wilhelm Wohlfahrt (the company is named after his wife) was originally an East German and the first sales of traditional Christmas articles from his home region to the American soldiers stationed in Germany took place on an American base near Stuttgart, not in Rothenburg. 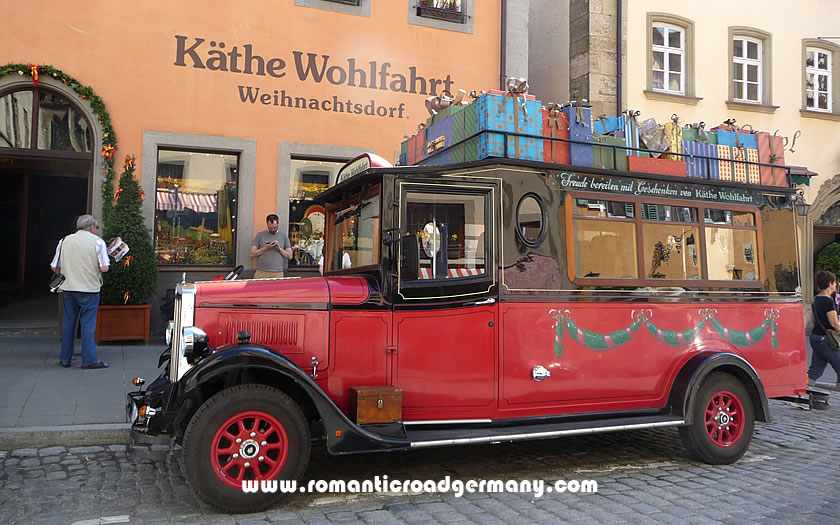 It was 13 years later that the company moved to Rothenburg and set up the first Christmas shop there (now there are six in Rothenburg alone). The company, now run by Wilhelm Wohlfahrt's son Harald, has also expanded into other German towns, to France and Belgium and has a strong presence on the internet.

Although similar music boxes, nutcrackers, incense holders, wooden Christmas tree ornaments and cribs can be easily found these days in the commercial Christmas markets all over the world, Käthe Wohlfahrt can be credited with much of the marketing and development of what is now a massive niche for Christmas gifts.

Amongst the many websites that the company runs is www.wohlfahrt.com.

The busy Rothenburg Tourist Office is located in the centre of the town in Marktplatz, in the old City Councillors' Tavern (around the corner in the same building as the clock performance). It is open all week in the summer and Advent and from Monday-Saturday in the winter.
Website: www.rothenburg.de