Some short descriptions of the main sights can be seen on our Landsberg Images page, but here is a short historical overview of the town, along with some of the places to go and find out more about Landsberg and the surrounding area.

Landsberg am Lech, like so many places in this part of Bavaria, was an important point on the Via Claudia Augusta, a Roman trade route which came up from Italy and headed towards Augsburg.

The Lech could be forded here and there was a high point for a fortification which would protect the road and river routes, as well as act as a border post for the area where the Lech runs out of the higher mountains. 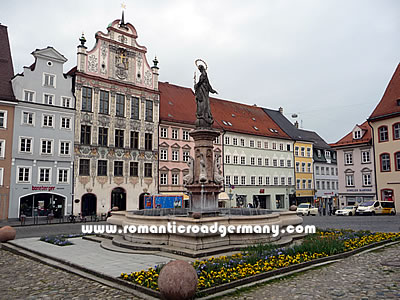 The Bavarian ruler Henry the Lion built such a fortified area in the 12th century, which was known as the "Landesperch", as well as a bridge across the Lech. Landsberg received its first town charter in the 13th century, but was burnt to the ground several decades later.

In order to rebuild this settlement in such an important strategic point, it was given the right to levy taxes on the salt and to mint its own money (very important in an age when no-one could be sure what a coin was worth unless it had an official entity backing it), a right that it held until the time of the Thirty Years' War centuries later.

The town survived the centuries through the pestilences of war, disease and economic changes until it became a popular spot for artists and those attracted by the history and the position in lovely countryside with views of the Alps in the distance.

In the 20th century, Landsberg also gained notoriety as the location where Adolf Hitler was detained (and subsequently started "Mein Kampf") and, as such, with the accession to power of the National Socialists the town became a place of pilgrimage.

(In fact, it was considered by the National Socialists to be one of "their" three main towns in Bavaria - along with Munich and Nuremberg - and there were plans to build a gigantic centre for youth parades and rallys, which however were never realised.)

The post-war era saw the development of the Landsberg am Lech area as an administrative and industrial region, an army garrison and, with the establishment of the Romantic Road making much of the history of the town, one of the tourist magnets along the Lech.

The New Town Museum (pictured on the right) is situated near the Church of the Holy Spirit slightly above the old town.

The building, which dates from the 17th century, houses exhibitions of discoveries from excavations in the area, culture in Landsberg from various eras, and special temporary displays.

Another museum is located on the opposite bank of the Lech in the Mutterturm. This is a tower built as an atelier by the German-British artist Hubert von Herkomer (who painted in the late 19th and early 20th centuries) and the Herkomer Museum houses a collection of his work.

The museums are generally open from Tuesday to Friday but are also closed in the winter months of February and March.
Website: www.museum-landsberg.de 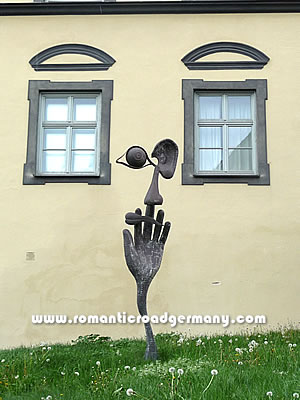 Towards the end of the Second World War, the largest concentration camp complex on German soil was built on the outskirts of Landsberg where it was planned that fighter planes would be built in giant underground factories.

The European Holocaust Memorial was created from the remains of some of the earth bunkers that were built as accommodation by and for those imprisoned in the camp - estimates of the numbers who were killed there range from 14,500 to over 40,000.

The memorial area is located in fields and woods off a country road. There are no official opening times and visits and guided tours can be arranged through the organisation Bürgervereinigung zur Erforschung der Landsberger Zeitgeschichte.
Website: www.buergervereinigung-landsberg.de

Looking for some of the best-rated accommodation in Landsberg am Lech?
Check accommodation rated 'superb' or 'exceptional' by visitors who used booking reservation website Booking.com. No reservation fees.
Check availability

The Landsberg am Lech Tourist Office is located in the main town square in the Town Hall. It is open Mon-Fri year round, and on weekends and public holidays in the summer months. Daily guided tours of the town are offered in German in the summer months.
Website: www.landsberg.de