Rothenburg is perhaps the best-known of all the medieval "sights" on the Romantic Road.

Along with its two neighbours (Dinkelsbühl and Nördlingen to the south) it is a prime example of a walled medieval town - one of the only ones left in Germany - and its beautiful buildings, walls and alleys have led to it becoming one of the most popular tourist destinations in Bavaria.

In fact it is such an attraction for tourists that it can seem to be a Middle Ages theme park in high season, with busloads of visitors from nearby cities streaming into Marktplatz from the coach parks on the edge of the old town.

However, the walls and history of Rothenburg still exert their magic for those who take the time to explore away from the crowded central 'sights' and especially for those who stay overnight and can wander the alleys, walls and cobblestones by moonlight...

In fact, talking about moonlight, one of the most popular daily events is the night watchman's tour organised by local guides who take people around the Marktplatz and the medieval wall overlooking the Tauber valley.

Of course, more independently-minded visitors can design their own walking tour to take in sights such as the medieval crime museum, the town hall and the castle garden. 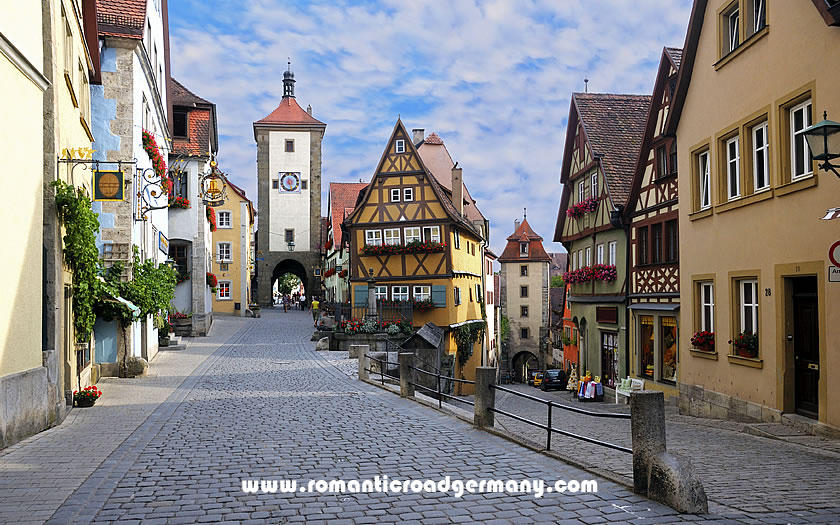 Rothenburg also welcomes thousands of visitors to its popular festivals, such as the play commemorating the Meistertrunk (an event from the Thirty Years' War) and the picturesque Christmas market held in the town cente during the Advent period.

Discover more about the town and its history on our Rothenburg information page: Rothenburg ob der Tauber Information Guide

One of the charming experiences of the Romantic Road is staying in accommodation at the heart of a German town like medieval Rothenburg. There is a wide choice of traditional hotels and guesthouses to choose from and even a popular youth hostel.

Other visitors prefer to take in Rothenburg on a day trip from nearby cities such as Munich and Frankfurt.

Information about where to stay and details of how to get there can be found on our travel page: Rothenburg ob der Tauber Accommodation & Travel


Rothenburg has plenty of places to visit during a stay and some of the main attractions are featured in our photo gallery along with short descriptions of each image: Places to See in Rothenburg

Where is Rothenburg ob der Tauber?

Rothenburg is located in the west of Bavaria near the border with Baden-Württemberg. The closest major city is Würzburg to the north.

What does 'ob der' mean in Rothenburg ob der Tauber?

'Ob der' is short for 'oberhalb der', which means 'above the' in English. Rothenburg is located on a hill 'above the' Tauber river.

When was Rothenburg founded?

Rothenburg was awarded its town charter in the 12th century and became a Free Imperial City in 1274. There had however been a small town at the base of fortifications near Rothenburg in previous centuries.

Is Rothenburg in the Harry Potter films?

A fleeting scene that many people believe is a location in Rothenburg appears in Harry Potter and the Deathly Hallows Part 1. In fact, the shot is from Bernkastel-Kues elsewhere in Germany. Rothenburg appears in the film credits because of aerial filming in the area which was not used (or digitally altered).

Is Rothenburg in the film Chitty Chitty Bang Bang?

Rothenburg is another location on the Romantic Road which features in Chitty Chitty Bang Bang. The centre of the old town features as the city of the Baron Bomburst and the Childcatcher.