Along with its two neighbours (Rothenburg to the north and Nördlingen to the south) it is one of the only remaining walled medieval towns in Germany and its imposing minster and the timbered buildings give visitors a strong picture of how the towns appeared in the Middle Ages. 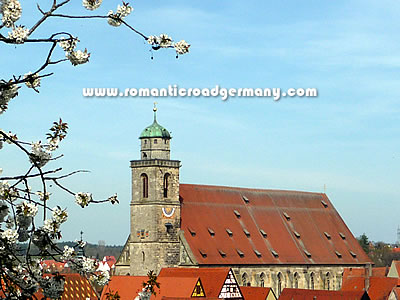 If you are looking for details of hotel accommodation and information about getting to Dinkelsbühl then you can find more on our Dinkelsbühl travel page:
Dinkelsbühl Hotels & Travel

And, if you would like a bit of a visual tour around the town itself, some of the main sights in Dinkelsbühl are featured in our photo gallery along with short descriptions of each image:
Dinkelsbühl Images