Some short descriptions of the main sights can be seen on our Füssen Images page, but here is a short historical overview of the town, along with some of the places to go and find out more about Füssen and the surrounding area.

Füssen's strategic position at the entrance to the mountains and on the Lech means that it must have been an important site in pre-history.

It is known, for example, that the area around the town and the lake was cultivated in these times.

However the roots of the town really date back to Roman days and the installation of a Roman way-station and fort called Foetibus on the Via Claudia Augusta, a trading route which arrived from Italy and headed north towards Augsburg. The term Füssen originates much later from the German of the 12th century. 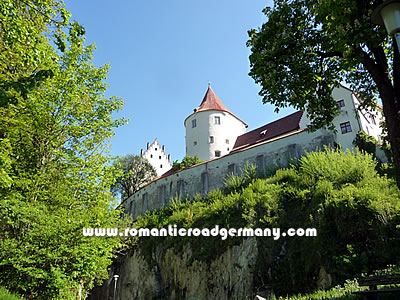 The saint who features in much of the town's history, St Magnus or St Mang (in local dialect), is popularly thought to have arrived in this area in the 8th century from Switzerland and the evangelical centre at St Gallen (much about the life and history of St Magnus is unsure). The monastery or abbey was built on the site of what was supposed to be his cell during the days when he lived.

The former site of the Roman camp was used, understandably considering its commanding position, as a fortification by the Prince-Bishops of Augsburg, who held rights to this area under the control of the Bavarian rulers. The current look of the High Castle above the town dates back to the 15th and 16th centuries.

Commercially, the town lived from trade for many centuries, as a transhipment point for goods which were travelling over the Alps and which were scheduled to travel on the rafts which plied their way down the River Lech.

It was also an important centre for the manufacture of lutes - an instrument which was popular in the Middle Ages through to the Baroque period.

Nowadays, Füssen is known for its tourism. The town is part of the Königswinkel (the "Kings' Corner") along with the neighbouring settlements of Schwangau and Pfronten. The phrase refers to the many castles and ruins in the area - especially the tourist magnets of Neuschwanstein Castle and the neighbouring Hohenschwangau Castle.

And, of course, the Romantic Road along with the surrounding mountain scenery and the sports on offer, help to swell the increasing number of visitors to this area.

The Town Museum (pictured on the right) is located in the former Benedictine Abbey of St Mang in the heart of the old town.

The building is reputed to date from monastic quarters which were founded by St Magnus, a follower of the evangelising monks from Ireland who came to Central Europe in the 6th or 7th century.

The actual buildings consist of the Basilica, the Anna Chapel and the former monastery. The town museum is entered around the corner from the religious buildings. 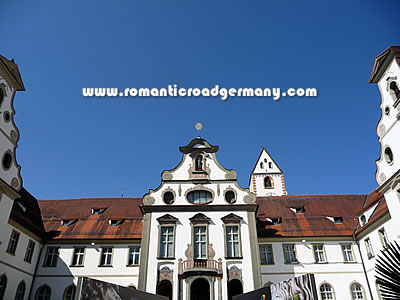 A selection of the Bavarian State Picture Collection is displayed in one of the wings of the Füssen High Castle. This fortification originally belonged to the Prince-Bishops of Augsburg and its imposing walls can be seen from most of the town.

The collection of paintings and sculptures offers works from the Middle Ages in this particular area of the Allgäu and Swabia, as well as allowing a visit to some of the impressive historic rooms.

Looking for some of the best-rated accommodation in Füssen?
Check accommodation rated 'superb' or 'exceptional' by visitors who used booking reservation website Booking.com. No reservation fees.
Check availability

The Füssen Tourist Office is situated outside the pedestrian area on the main road which goes around the historic centre. It is open Mon-Sat year round, and on Sundays and public holidays in the summer months.
Website: www.tourismus-fuessen.de