Some of the places to visit can be seen on our Würzburg Images page along with a brief description - however a short history of the town and of some of the particular places of interest are given below.

The first fortifications on the hill where the Marienberg Fortress now stands date from a thousand years before Christ, when the Celts built one of their formidable ring fortresses on this prime defensive position.

The city itself grew in the 7th century as it became the seat of a Franconian lord and, eventually, a religious centre and a place of pilgrimage for the martyred St Kilian.

In the 12th century the first of the powerful bishops was elevated to the worldly rank of Prince Bishop (actually "Duke of Western Franconia") - an important step as that meant that church donations and tithes as well as regional taxes all flowed into the bishops' administration. 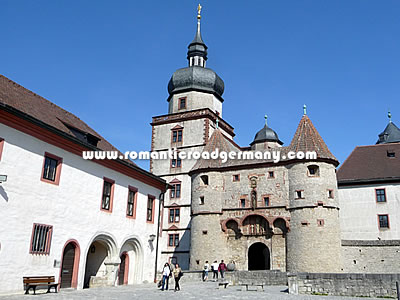 Würzburg had grown so powerful that it was considered the unofficial capital of the Holy Roman Empire - the wedding of Emperor Frederick I was held here, for example.

The fortress on the Marienberg was important to the Prince Bishops not only for its prominence but also for its defensive qualities. The citizens of Würzburg, possibly fed up with the taxes, declared themselves for the peasants' side in the Peasants' War of the 16th century.

Through various wars and fires, both the city and the fortress were continually expanded and provided with stronger defences. In the 18th century, the age of absolute rulers who brought a relative stability to they lands the controlled, the Prince Bishops felt secure - and rich - enough to build themselves a palace befitting their position in the city down below. The Residence was finished at the end of 1744.

Eventually the Napoleonic Wars caused the downfall of the Prince Bishops and the city passed under the control of Bavaria.

The city suffered appalling damage at the end of the Second World War. Although filled with refugees and injured (it was considered a "hospital city") a massive bombing raid was carried out on the city on March 16, 1945. Within 17 minutes 87% of the city was destroyed in a massive firestorm which could be seen from over 230km away.

The city became known as the "Grab am Main" ("the grave on the River Main") and the subsequent American occupation even put forwards proposals to build a new city in another location and to keep the ruins as a memorial (proposals which were heartily rejected by the remaining population who concentrated in the post-war decades on the reconstruction of the Würzburg of their memories).

The Würzburg Residence is the stunning former home of the Prince Bishops. Located on the edge of the inner city, the Baroque palace was built in the 18th century under the stewardship of Balthasar Neumann but incorporated art and decoration from different parts of Europe.

The fortress on the other side of the River Main was the previous residence of the Prince-Bishops (in the days where they perhaps needed more personal protection!). Fortified in the days of the Celts, much of the current building dates from the 17th and 18th centuries.

The Cathedral is dedicated to the Irish martyr St Kilian, who met his death here on missionary work. The original cathedral is now thought to have been where the current Neumünster basilica is located - the location of the current cathedral was chosen in the 11th century. The cathedral was badly damaged in aerial bombing that destroyed much of Würzburg at the end of the Second World War. In 1946 much of the remaining building collapsed and reconstruction lasted until the 1960s.

The Neumünster was where the bones of St Kilian and his two assistants were said to have been "rediscovered" (they had been killed for trying to persuade the current ruler that his marriage was "unchristian"). During the time of the closure of the cathedral it served as a replacement and is now officially the Würzburg parish church.
Website: www.dom-wuerzburg.de
Website: www.neumuenster-wuerzburg.de

The museum in the old renovated granary at the river's edge is dedicated to modern art from the 19th-21st centuries.
Website: www.kulturspeicher.de

Looking for some of the best-rated accommodation in Würzburg?
Check hotels, guesthouses and apartments rated 'superb' or 'exceptional' by visitors like you who used booking reservation website Booking.com. No reservation fees.
Check availability

The Würzburg Tourist Office is located in the centre of the town on the Marienplatz. The yellow building is an old Baroque mansion called the Falkenhaus and is situated behind the Marienkapelle. It is open all week in the summer and from Monday-Saturday in the winter.
Website: www.wuerzburg.de