Cycling along the Romantic Road is made easy by the fact that there are a number of connected cycle paths away from the busy main roads and that there is a recognised long-distance trail (the D9) covering the route in its entirety.

The distance is 440km and it is relatively flat in many of the stages (in fact, despite the fact that it goes into the foothills of the Alps, the overall difference in altitude is not particularly great - under 600 metres). The main climbs come around Rothenburg ob der Tauber and approaching the hilly country of the Pfaffenwinkel. 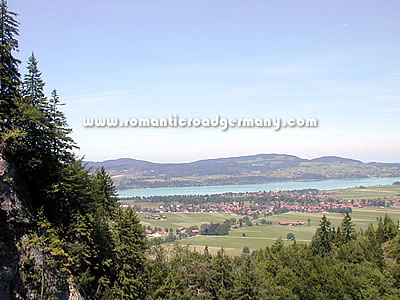 The official Romantic Road tourist association suggests splitting the journey into 10 stages, although the more energetic or time-constrained might find it possible to combine some of the shorter stages together.

The association has also produced an extensive guide (in English or German) to cycling the Romantic Road on this specially designed route, which is available from the online shop (cost ca. 20 Euros).

GPS data can also be downloaded for free (with registration) and there is a free bike map (not particularly detailed) with short descriptions of towns available in local tourist offices.

Of course, it is not necessary to do the whole ten days either. There are shorter sections which lend themselves admirably to those looking to bumble about on two wheels and to take the time to explore the towns and villages (and vineyards!).

Up near the northern end, the Tauber valley from Tauberbischofsheim through to Rothenburg makes a lovely (and mostly flat, apart from the climb to Rothenburg at the end) short-ish route.

A subsequent section, from Rothenburg through to Nördlingen, covers the "big three" walled medieval towns. And the final stretch from Schongau through to Füssen is slightly more challenging in the lovely hilly countryside, but the most scenic of the shorter options, with the Alps rising in the distance and the attraction of Neuschwanstein castle in its mountain setting at the end of the journey.

The Europabus coach service also offers a transport service for cyclists and their bikes (reservations advisable), as well as offering short packages for cycling tours: www.touring-travel.eu.