Travel To The Romantic Road

Travel advice for individual towns along the Romantic Road is given in each of the specific sections, with information about road distances to various airports and rail travel to the town or village.

This page is more designed to answer questions for those looking to visit the Romantic Road and Germany from abroad - in other words, which are the best airports to use for getting to the start of the trip and leaving at the end - and some ideas of the different methods people use to get up and down the route. 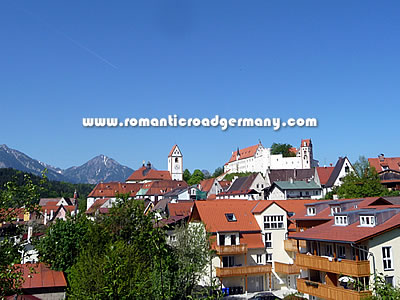 There are a number of airports in southern Germany which are suitable for use as an entry and exit point for those wanting to visit the Romantic Road. Some of them are more suitable for fellow Europeans on short-haul flights (or for people from other parts of the world who are making the Romantic Road part of a longer European vacation) while others are massive cosmopolitan airports with flights from all over the world.

The two "big" airports, with flights from destinations around the globe, are Munich and Frankfurt.

Frankfurt Airport has the advantage of being closer to the traditional "start" of the Road (most people do it north-to-south) in Würzburg. Munich Airport, on the other hand, is convenient for both Würzburg and Füssen (the "end" of the Road).

The next set of airports are the second rank of German city airport destinations, not as big as the international hubs but with a good mix of internal and international flights. Stuttgart is an option at this level, with a very good choice of European carriers and internal flight providers. Nuremberg (Nürnberg in German) is a slightly smaller version.

Two airports that have become popular arrival and departure points because they feature low-cost airlines are Memmingen and Friedrichshafen, especially for those who are arriving from the UK.

Finally, an option outside Germany - especially for those who are just looking for an airport to depart from the southern end of the Road - is Innsbruck Airport just over the border in Austria.

Transport along the Romantic Road

Some people used organised trips along the route, but part of the charm is stopping when and where you want to. Here is a brief run-down of the different ways people can use to travel the Romantic Road, with links to more in-depth articles about certain methods:

It is possible to do sections of the Romantic Road using the train. However, there is no one line that allows a straight north-south trip and there are some major deviations that will need to be made in the central section as well as some towns which do not have a current rail service.

Those who are keen rail buffs may be interested to know that there is a section from Nördlingen to Feuchtwangen which is covered by steam train on certain days. Details (currently in German only) are on the Nördlingen Railway Museum site: www.bayerisches-eisenbahnmuseum.de

The bus is a more attractive option, although it is not actually a public bus. There is a special private Romantic Road bus service which runs daily in both directions along much of the route. The "Europabus Romantische Strasse" starts from Würzburg in the morning and ends up Füssen in the evening. The reverse trip starts a little earlier in Füssen and arrives a little earlier in Würzburg.

Part of the reason for those times is that the bus heading north to south actually starts in Frankfurt each day, so it makes a great option for a transfer to Würzburg for those arriving into Frankfurt.

The other advantage / disadvantage is that just after (or before, depending in which direction you are travelling) Augsburg the bus makes a detour out to Munich. This again is wonderful for those who are looking to get to or from that city but it does mean that there is a stretch of the Romantic Road (essentially between Friedberg near Augsburg down to Wildsteig which means that you are missing out on the towns of Landsberg am Lech and Schongau - of the ones that are covered on this website).

The bus runs from on Wednesdays and Sundays from April to October and on Saturdays from mid-May through to the beginning of September. More details can be found on the company website here: www.touring-travel.eu

Obviously car hire is available from airports and cities and towns along the way for those arriving by plane. And plenty of visitors come to the Romantic Road from other parts of Europe with their own vehicle.

Part of the joy of having one's own car is the ability to make your own schedule and to make diversions off the recommended route to sites that interest you. But as somewhere to start, here are a couple of schedules - one rushed and one more leisurely - which would cover the highlights of the Road:

Day 1 : start in Würzburg and head south through the Tauber valley to Rothenburg, stopping in one of the Tauber valley towns for lunch (Bad Mergentheim?) and taking some time in the evening to look around Rothenburg
Day 2 : explore more of Rothenburg before driving south for lunch and the sights of Dinkelsbühl and overnighting in Nördlingen
Day 3 : with maybe a brief stop at Harburg or Donauwörth, drive south to the city of Augsburg and spend some time soaking up the history and sights
Day 4 : a long day to the end of the route with increasingly attractive scenery - where you stop will depend on your interest in small villages or the historic (and popular) sights of the Wieskirche and Neuschwanstein Castle - before finishing your short and hurried excursion in Füssen

Day 1 : start in Würzburg and head into the Tauber valley, with a stop at Tauberbischofsheim before reaching Bad Mergentheim. Overnight here and explore the headquarters of the Teutonic Order and the surroundings.
Day 2 : another lazy day meandering through the vineyards of the Tauber valley before arriving in good time at the walled town of Rothenburg. Explore the sights and maybe do an evening guided city tour.
Day 3 : morning down to Dinkelsbühl with the afternoon to Nördlingen and overnight. Take some time to explore both interesting towns and maybe look at the Ries crater around Nördlingen.
Day 4 : south past the picturesque Harburg Castle (tour can be undertaken) or to the pretty centre of Donauwörth before ending up in Augsburg.
Day 5 : explore Augsburg and its rich history.
Day 6 : head south through the rolling hills and villages of the Alpine foothills. Take a look at Landsberg am Lech and the Wieskirche before eventually heading down to Schwangau or Füssen.
Day 7 : visit either Neuschwanstein or Hohenschwangau Castle and then spend the afternoon having a look around the town of Füssen with its historic centre.

And, if biking wasn't energetic enough, you could also walk the length of the route (although to be fair most will attempt only sections of it!). More details are available on our Walking the Romantic Road page.