It doesn't have the grand passions and romantic dreamery that surrounded the building of its spectacular neighbour.

But it's arguable that it was one of the principal reasons that the idea of Neuschwanstein was ever started. 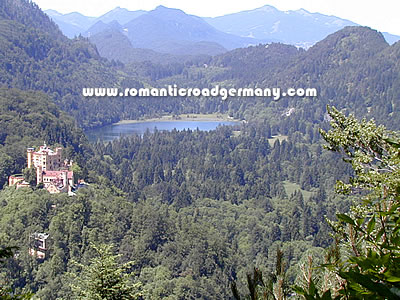 Schloss Hohenschwangau is situated slightly to the south of Neuschwanstein on a small hill between the Alpsee and Schwansee (that's the Schwansee in the picture above, with the mountains of Austria behind it).

Hohenschwangau Castle had long been the residence of the rulers of the area, but had become a ruin by the time that it was acquired by King Ludwig's father, Maximilian II, in the 19th century.

He rebuilt and redecorated it in the style of a romantic palace from the Gothic period. One of the decorators was famous set designer Domenik Quaglio, who painted the walls with legends from Germanic history.

And it was here, as a young child, that Ludwig got his first exposure to the legend of the Swan-King Lohengrin - a figure who originally appeared in the Grail legends and later was the subject of Wagner's opera.

The castle is now in the hands of a state foundation set up to administer the property of the former Bavarian ruling house.

Looking for some of the best-rated accommodation near Hohenschwangau?
Check hotels, guesthouses and apartments rated 'superb' or 'exceptional' by visitors like you who used booking reservation website Booking.com. No reservation fees.
Check availability